Daniel Kemish is a British Born Country/Folk Singer. His songs and stage presence is head-turning, commanding the attention of his audience, a voice that flows effortlessly from country smooth to husky rock, and melodic tunes you\'ll be humming for days. Daniel is a touring artist at heart and lives life on the road, having released 2EP’s, two albums and has a lot of stories to tell. He released “Fools & Money” his debut full length album in 2016 which was recorded at Ocean Way Studios, Nashville USA. He then started his touring career off and since he has performed over 300 shows and driven over 150,000km. For Daniel’s Second album “Under The Same Sky” he craved complete solitude in composing and writing. On the 24th January 2017 Daniel spent one month alone in a mountain hut in Austria, having no electricity/running water or phones, and only a wood stove for heating/cooking and melting snow. This allowed him to get back to real basics of song writing and create an album that was more personal to himself. The results are impressive and Daniel evolved with a new sound and style that truly shows he has matured as both a songwriter and performer. Don’t miss this chance to see Daniel up close and personal in an intimate show that will truly capture the passion he has for performing music. Drums: Ruben Salamanda (Spain), Bass: Fabiano Santos (Brazil) Lead guitar: Tiago Jesus (Portugal). 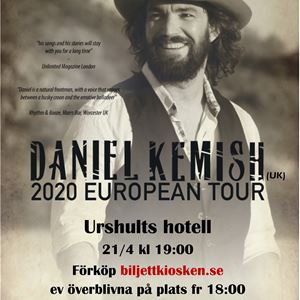